Monday was Cinco de Mayo, and Stephen Colbert joked about how Americans celebrate the Mexican holiday: "Many Americans are eating tacos today, even though it is not Tuesday!" I had Colbert's joke in mind when I took Anemo back to New Eritrea Restaurant on Tuesday. (Suzanne has been out of town the last few days and I have no interest in adding to the pile of dishes in the sink.) I realized I've fallen into a pattern by eating food from New Eritrea the last three Tuesdays. Manna had never heard the phrase "Taco Tuesday," but nevertheless I suggested he start a weekly "Teff Tuesday" happy hour. Teff is the gluten-free grain from Ethiopia used to make injera. This article says teff "is poised to become the next quinoa--a grain superfood." After all, Manna should capitalize on the grain's emerging popularity.
Besides getting another vegetarian sampler and watching some of the Miami Heat game with Anemo, I also tried out my elevator speech on Manna. After all, Manna was the first to try translating it into Amharic. He was complementary about my delivery, saying any Amharic speaker would be able to understand what I had just said. Just to be sure, I tried it again on Yodit, an employee at Manna's restaurant. Yodit, like Manna, is from Eritrea, but she left her country at age four when her parents went to Sweden. So she speaks Swedish, English, Tigrinya (one of the languages of northern Ethiopia and southern Eritrea), and, most recently, Amharic. Yodit told me that the transition from Tigrinya to Amharic is not difficult since the languages share many roots. Thus she understood what I was saying as well. And though Yodit preferred I didn't video her, she did agree to make an audio recording, which I have been listening to this morning. It would have been harder to learn initially from her version, since she speaks rapidly, but it is helping me now to get to a more conversational pace.

One last thing. Yodit (which is a form of Judith, the feminine of Judah) told me that some people call her Yoda. Since I had Cinco de Mayo still in mind, I asked if she had heard of Star Wars Day, which is celebrated on May the Fourth. She hadn't, but she did know who Yoda was, and I don't think she is generally pleased about the association. I told her that she should forget Yoda's appearance and just hope for his longevity. 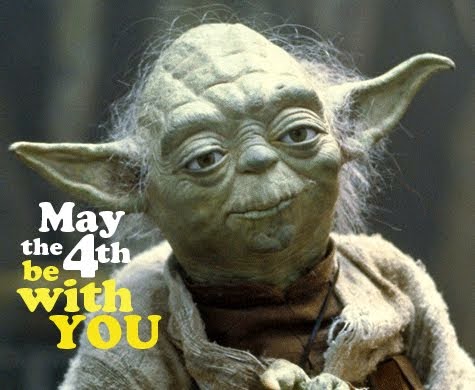