On October 9th I saw the movie Difret (ድፍረት) with the seventh grade class of my son's school. Suzanne had volunteered me as a chaperone for the "field trip" because she knew I would be interested in the subject matter. She was right. Difret, which takes its name from the Amharic word meaning courage or audacity, is an award-winning movie about T'elefa (ጠለፈ), the practice of abducting young girls for marriage in Ethiopia.
The movie is based on the true story of Aberash Bekele, a 14-year-old girl who in 1997 was abducted on her way home from school by men on horses. (Watch the scene.) Locked in a hut, Aberash was beaten and raped by the man who intended to become her husband. Later, with a gun accidentally left behind by her captors, Aberash killed her rapist, a 29-year-old farmer. The movie depicts those events in its first few minutes. The majority of the film's story concerns how Meaza Ashenafi and the Ethiopian Women Lawyers Association (EWLA) took on Aberash's case and, against all odds, won, making the practice of child abductions officially illegal. (Watch an early scene between the girl and her lawyer/protector.)

The word T'elefa, according to my Amharic dictionary, also means "rape," "hijack," and "change the direction of something." The practice undoubtedly changes the direction of a girl's life. Here's how a BBC News report from the time of Aberash's trial in 1999 describes T'elefa:


In Ethiopia's wild south, abduction is a legitimate way of procuring a bride. The practice has been going on so long that no-one can remember how it all began. The usual procedure is to kidnap a girl, hide her and then rape her until she becomes pregnant. Then, as father of the child, the man can claim her as his bride. At this stage, he will call on the village elders to negotiate the bride's price and to act as middle-men between his family and that of his bride.

It's hard to believe that this custom of T'elefa has persisted for so long. It's also hard to find any reliable statistics on the practice, especially now that it is outlawed. In his official statement, director Zeresenay Berhane Mehari says that T'elefa "affects over 40% of adolescent girls" but doesn't specify region or ethnic group. According to a 2001 study conducted in a rural district of northwest Ethiopia and published in an Ethiopian medical journal, the prevalence of marriage through abduction was 6.2% (72/1168)." Interestingly, the median age of the abducted girls in that study was 13, with the oldest at 20 and the youngest only 7. So while the movie intended to shock with its subject matter (and it did), it could have easily been more shocking.

What is also shocking (although it's hard to top the abduction and rape of a 7-year-old girl) is that the film was not allowed to be shown in Ethiopia, even after winning awards all around the world. The film was to have its Ethiopian premiere in Addis on September 4, 2014. Everyone was seated and the lights were just about to dim when Zeresenay suddenly emerged on stage to inform the audience that he could not show his film. Here's what he said:


Distinguished guests, ambassadors, we were just told by the police that we have to stop this film because there is a court order on it. We have not been informed prior to this. The Ministry of Culture knows about this and the government knows about this. This is the first time we are hearing it. This is obviously an attack on us and I am really sorry for this to happen and I hope we’ll see you again…

Someone posted this moment to YouTube, which I saw just a couple of weeks ago. But censorship seems to move fast in Ethiopia. I just tried to add a link to that video and saw that it had been taken down due to "copyright infringement."
I wish I known about all this when I saw the film with the seventh graders at the Embarcadero Center Cinema, because Zeresenay was there with his wife and young son. I would have asked him what he had learned about the ban on Difret since September 4. Based on interviews earlier in the year, Zeresenay did not seem worried that there would be any interference from the Ethiopian government, especially since it did not shine a light on contemporary corruption. As Professor Alemayehu G. Mariam wrote in an essay called DIFRET: The Abduction of a Film in Ethiopia, "Zeresenay simply did not understand the perverted thug mind."

As I mentioned in a previous post, Ethiopia is ranked 143/180 in the World Press Freedom Index and certainly falling fast. What has become clear is that journalists and filmmakers will need even more ድፍረት (both courage and audacity) to confront the Ethiopian government's increasingly repressive and pervasive censorship. 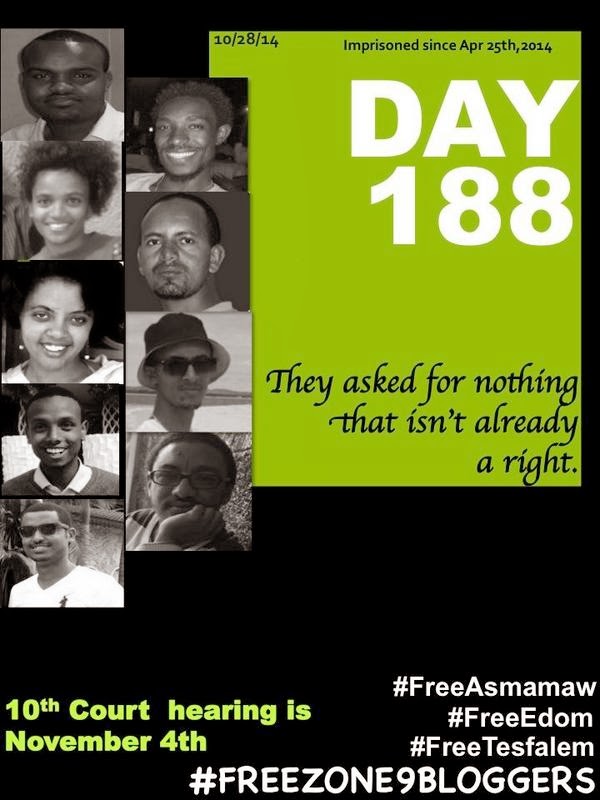