For the last two days, I've been living in an apartment on the campus of Hope University College, where the International Leadership Academy of Ethiopia (ILAE), the high school I'm visiting, has its offices and classrooms. The attractive, open campus is located right near the relatively new district of Jemo (ጀሞ). Dawit, the physics and math teacher at ILAE, told me that few "faranjis" (ፈረንጅ = foreigner or "whitey") come to this area, so I'll probably be more of a curiosity here than in other parts of the city. Jemo's relative lack of experience with tourists should allow for more interactions in Amharic.


On the other hand, during my first two days I stayed in a very different neighborhood (Mekanisa) that contains many embassies and expatriates, so my presence on the streets did not arouse much attention. I spent most of that time walking around, going to Western-style coffee shops, and chatting with Almaz, an Ethiopian-born woman who rents rooms in her beautiful house. As Almaz has spent more than half of her life in America, leaving as a refugee through Sudan and ending up in the Boston area, we spoke exclusively in English. Yet I was able to get my linguistic feet wet by practicing greetings with the few helpers she employs.
I plan to see Almaz at least once more before I leave. I also hope to visit with members of Lulit's family, who also live in the Mekanisa area. While I enjoyed the comforts of the neighborhood, it's better for me to be in Jemo, where people on the street typically won't speak to me in English. However, it's nice to know the comfort of a real flaky croissant is only an hour's dusty walk away.
Finally, enjoy this quick tour of my apartment on the Hope University College Campus. You'll see evidence of persistent jet lag in my introduction. Also, I probably should not have worn flip-flops to make this video!

I'm writing from the Nefas Silk Lafto district of Addis Ababa. I've been here almost 48 hours, staying in a guesthouse near the roundabout that connects Egypt and Lesotho Streets. I have plenty to say about my first two days here (a Saturday and Sunday) and pictures to upload, but since I have not yet established a wifi connection for my own laptop, I will use the house computer to write about a movie I saw on the plane ride over.
I actually saw several movies during the five-hour flight from San Francisco to Washington DC and the thirteen-hour flight on to Addis Ababa, including 22 Jump Street, which was very funny, but because I'm engaged in a language and culture project, I made sure to watch the two Ethiopian movies featured on Ethiopian Airlines. Both were awful movies by any international standard, with terrible writing and terrible acting (save, perhaps, for the comic actor who played opposite the lead in both films), but I was interested more in matching the Amharic language to the English subtitles, as well as seeing what cultural values the films tried to promote. Ethiopian Airlines is wholly owned by the Ethiopian government, so there is surely some government official somewhere deciding which films should be shown. (The movie Difret, which I wrote about earlier, would certainly not make the cut.)

The first movie I watched was called Wede Fikir (ወደ ፍቅር), which translates as "Towards Love." It involved a tall, quiet (and rather boring) man who for some reason tells his family he's already married. So then his crazy friend tries to match him with all sorts of ill-fitting women while the hero has already fallen in love with a neighbor suffering domestic abuse from her angry, jealous husband. This film is fairly straightforward in its portrayal of philandering and domestic violence as detrimental to Ethiopian society.

The other film, called Ayrak (አይራቅ), meaning something like "Don't Be Far" or "Don't Let It Be Far," was much more interesting. It tells the story of two bright students from a rural part of Ethiopia who have professional ambitions and plan to marry after fulfilling their educational goals. However, the male student is called away to take care of a family member, and when he returns to the village two months later, his future wife has already left for the capital city. The movie takes place after seven years have passed. The man has remained in the village and become a farmer; the woman ends up running a big environmental project in Addis Ababa for the United Nations. The man hears this news and decides to track the woman down to fulfill the promise of marriage (he wears her ring around his neck).

Here's the man in Addis, fresh from the countryside, looking like an Ethiopian Burt Reynolds, about to be robbed by some street thieves before his friend rescues him. (It's a good warning about being careful with money and mindful of surroundings.) The woman he seeks is on the cover of the magazine. [Note: I had headphones on, so the sounds are the ambient conversations on the plane.]

When he finds his love in the big city, she has changed. She's now smoking, drinking, and going to clubs. He could not be more disappointed (note the acting of "disappointment"):

At the club, the country man can't stand the music and declines multiple invitations to dance. UNTIL a traditional Ethiopian song starts to play. (You can tell by the clapping.) The music makes him feel at home in this strange environment. When he starts rapidly pulsing his shoulders to the rhythm, the woman shows her approval.

The woman's big environmental project for the UN is failing because her campaign for change is somehow ignoring the values of the Ethiopian people. She complains that her countryfolk are backward and unable to adapt to new ways of thinking. As the woman drives home, she witnesses a young man give up his seat at a bus stop to an older man and then a small boy give up his seat to the young man. The epiphany makes her change her rethink her whole approach to the campaign. (It's actually a touching scene, versions of which I will be on the lookout for in the streets of Addis.)

Meanwhile, a successful yet sleazy man pursues the woman for marriage, but she ultimately chooses to chase after her first love, who has by now returned to his village. The fairytale ending implies the two will live together in rural Ethiopia, conveniently ignoring the reality of the woman abandoning her career to do so.

The title of the film, Ayrak, seems to have multiple meanings besides the obvious one of physical separation. It could be saying that Ethiopian women should not get too far from expected gender roles (this movie would certainly fail the Bechdel Test); it might also be telling Ethiopians in general not to stray from traditional values of hospitality, kindness, and ethical living while the country undergoes rapid modernization. As bad as the film was, it gave me a lot to think about. So as I am navigating the busy streets of Addis Ababa for the next two and a half weeks, far from home, I can pay attention to behaviors that indicate which values Ethiopians are holding close.
Posted by Unknown at 7:52 PM 7 comments:

I leave for Ethiopia yenega samint (የነገ ሣምንት, from tomorrow one week), flying through Washington DC on the way there, and through Rome and Toronto on the return. I booked this three-week experience (November 20 - December 11) back in early September, knowing I would need some kind of centerpiece to my language and culture project. Among other things, the trip will provide a much needed boost to my Amharic practice, which I have been neglecting lately.

In my last conversation with Jan, we talked about the importance of visualizing my time in Ethiopia in advance, in as much detail as possible, to maximize the outcomes of my experience. Naturally, I plan on letting serendipity play its important role, but I also want to practice imagining specific meetings with specific people (or types of people), which is a new approach to travel for me. Such visualizations will encourage me to come prepared with relevant vocabulary.

To take the easiest example, I can visualize the ride from the airport to the guest house where I will stay for the first two days. I just learned yesterday that a man called Jon will be waiting for me just outside the airport in Addis Ababa, holding a sign with my name. Jon is the brother of Almaz Asresahin, the woman who runs the guest house. Almaz and I were connected through a mutual friend named Jeff Blair, whom I met earlier this year in Seattle through a friend that he and I have in common. Learning the vocabulary to talk about these friend connections could provide material for my first conversation during the drive with Jon.
I also plan to know more about the area before I get there, which could also be a topic of conversation. Jan recommended spending time on Google Earth to preview the landscape of Addis Ababa. I just learned that the capital city has ten "subcities," and that Almaz's guest house is in the one called Nifas Silk Lafto (ንፋስ ስልክ ላፍቶ).
I have no illusions about the prevalence of English worldwide, especially among people working in the tourist industry. I will certainly meet many people who speak English far better than I can speak Amharic. Most likely, Almaz's brother Jon is one of them. But the more I prepare vocabulary, phrases, and even full sentences beforehand, the more I can forestall switching to English. After all, making progress toward language fluency is one of the primary goals of my trip.

**Another goal is to get to know the education community in Addis, starting with the International Leadership Academy of Ethiopia (ILAE). But that's a topic for another blog.**

Still another goal is to learn more about the imprisoned Zone 9 Bloggers. Just two days ago, the journalists reached their 200th day in Ethiopia's notorious Kality Prison. I hope they got some good news at their 11th court hearing today. If they didn't, and the government schedules another court date while I am in town, I visualize attending. 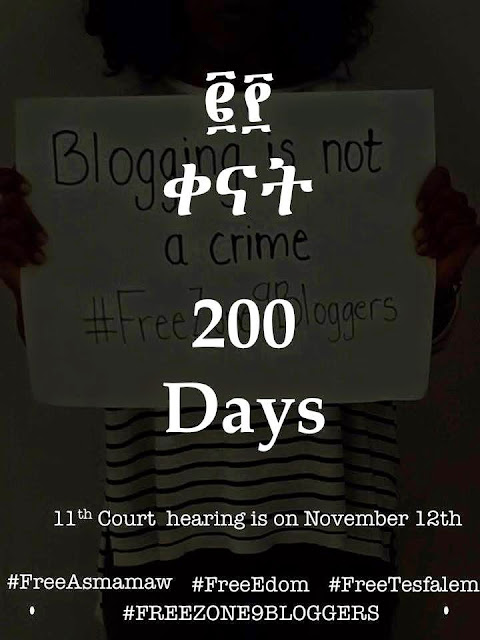