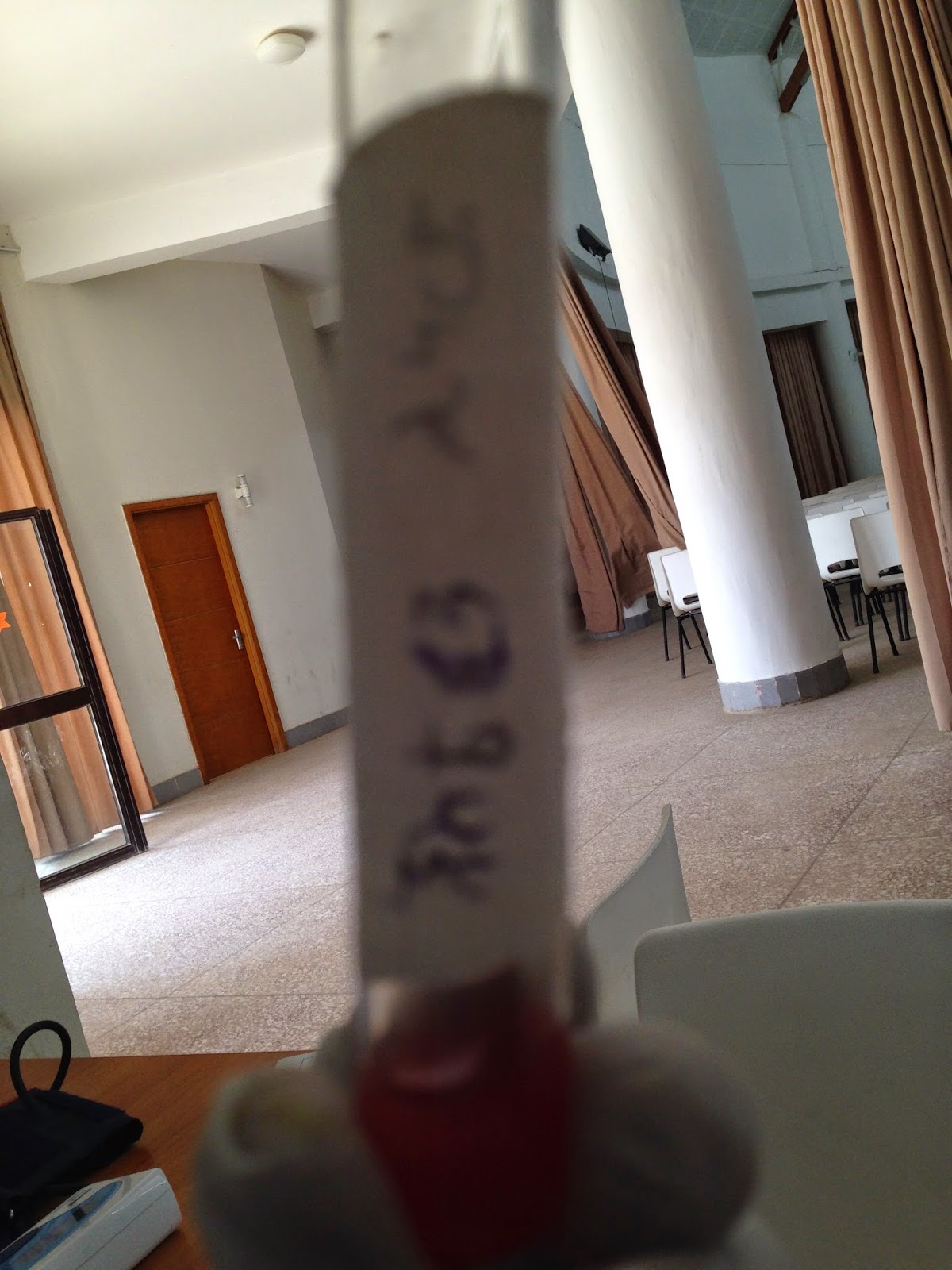 That’s my blood in that test tube. I know that because my name, እስቴፈን ለዛርድ (Ihstayfen Lezard) is written on the label. After I impressed the attendant with my healthy blood pressure, normal body mass index, and iron-weighted hemoglobin that allowed a droplet of my blood to sink through a copper sulfate solution, I was cleared to donate.
Yesterday was የደም ልገሳ ቀን (Yedem Ligesa Qan), or Blood Donation Day, here at Hope University College. I was slightly concerned about giving blood at 8,000 feet, but I went ahead anyway. I figured it would be a good chance to think about the meaning and symbolism of blood while performing a good deed.
When you adopt a child, whether domestically or internationally, someone will eventually utter a sentence with the word blood in it. For Suzanne and me, that moment occurred this past summer upon arriving in Curaçao, when we were almost denied entry because Anemo was traveling on an expired Ethiopian passport. After Suzanne confirmed that Anemo was indeed our child, the immigration agent said, "Si, pero e tin bo sanger den su kurpa?" (Yes, but does he have your blood in his body?) To be fair, the general population of Curaçao has a generous view of adoption, with many children taken in by extended family or family friends and raised as if they were their own. But this isolated comment still stung... (and much more than the needle going into my arm).

I certainly don't live life anticipating bad attitudes from people about our adoption of Anemo, but when I encounter one, I feel it deeply. The way an Eritrean restaurant owner (not Manna!) wouldn't look at our family directly while he took our order still haunts me. I understand international adoptions are controversial; I would just prefer to live above (or beside) the controversy. And yet I know one of the reasons I am undertaking this project, and living for a few weeks in Ethiopia, is to reduce the controversy somewhat, at least in our particular case. I want to do what I can to be the best case scenario for Anemo. I know I can't win over everyone, but if I've won over Anemo, maybe that's all that matters.
'Blood is thicker than water' goes the saying in English, but I can't imagine a thicker connection with my son. It's definitely been challenging being away from Anemo and Suzanne for so long, and I was thrilled last night when we finally figured out how to video chat. At least while I'm away (for only one more week), I'm trying to take in all I can about the language and culture here. Keeping with the theme, I learned two Amharic terms at lunch yesterday using the word ደም (dem, blood): ደም መጣጭ (dem meThaCH), which means an oppressive person, like a bloodsucker I suppose; and ደመኛ (demenya), which can mean brave, or, in a different context, vengeful, as when one feels blood coursing through one's veins. While I probably won't remember these two more advanced terms, by metaphorically swinging two bats, I'll always recall the word ደም.

So while my ደም will never "course" through Anemo's "veins," I can at least smile at the fact that some Ethiopian, at some point, will receive a pint of my blood, which hopefully will restore that person's life like Anemo has immeasurably restored mine.
Posted by Unknown at 12:24 PM